この記事はK部長が英語で書いたものを、新入社員のCさんが英語を修正したものです（修正反映済み）。
There is another story about an A-bomb victim that took place on August 6, 1945. It is a story about a foreign student who studied at Hiroshima University.
His name was Nik Yusof and he was from Malaysia.
He lived in a student dormitory in Otemachi 4-chome with nine other students from Southeast Asian countries.
On that day, August 6, he and his colleagues at the dormitory all fell victim to the A-bomb .
Fortunately they somehow survived the nuclear explosion.
Nik escaped to the west of Hiroshima. The reason was the location, as the areas to the north and east of the dormitory were destroyed by the disaster.
He reached Itsukaichi-cho, like many Japanese survivors. The walking distance from the center of Hiroshima to Itsukaichi-cho is 12 km. Healthy people usually need four hours for this distance, so it is easy to imagine that wounded people need more time.
It was the same for Nik. Finally, Nik reached the Buddhist temple "KOZENJI" and died there.
He was buried at the temple together with many other Japanese A-bomb victims.
Several years after (in 1964), the chief priest mourned the death of Nik Yusof who came here alone from a distant country to study. He decided to make an Islamic-style grave for him.

Another interesting story is about the family name of the chief priest.
His family name is 「星月」, which literally means "star and moon". 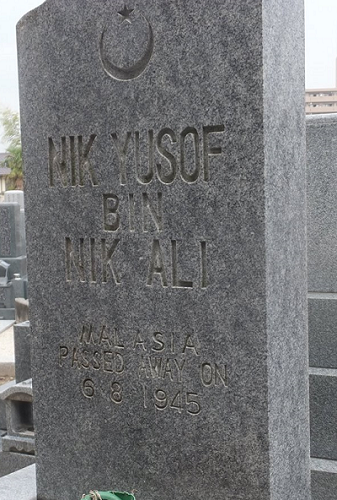 Islamic countries use a star and a crescent moon as symbols on their national flags. They believe that the star symbolizes intelligence and the crescent moon symbolizes development.
I think that this coincidence made the chief priest feel a lot of sympathy for Nik who came from an Islamic country.
This is only a small part of a story about the A-bomb victims.
There were 450,000 A-bomb victims in total (Hiroshima and Nagasaki), so all of their stories cannot be told.
In an ideal world there should be no discrimination based on religion, nationality, race, sex or age.
It is very sad that this ideal cannot become reality in today’s world but we can learn about it from the stories of war victims.
<Citation from>
http://www.hiroshimapeacemedia.jp/hiroshima-koku/exploration/index_20080716.html
https://ja.wikipedia.org/wiki/南方特別留学生
T.K.